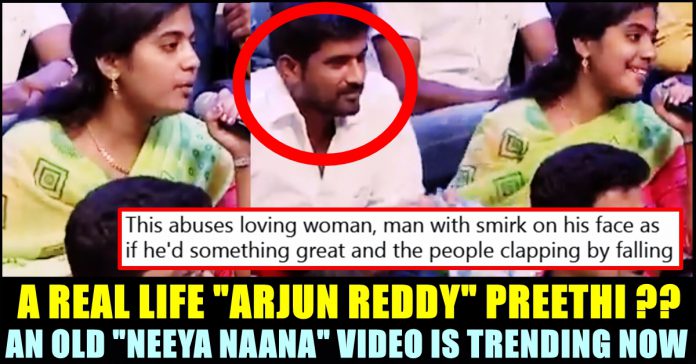 An old video from a particular episode of Vijay television’s debate show “Neeya Naana” resurfaced in Internet and became a subject to severe criticism. In the video, a woman could be seen saying that she feels proud about getting beaten by her husband in public amidst loud cheers and accolades from the people of her side. Host Gopinath could be heard expressing his disagreement over people supporting the woman’s statement. The particular video clip was uploaded by a twitter user and is going viral among the Twitter users with reactions condemning the woman for encouraging domestic violence.

“Neeya Naana” is a debate show that is being hosted by Gopinath for a long time. People who support two different ideologies would debate in each episode with different topics. In the episode which took place between two set of people who support “One can lose his/her self respect in love” vs “One shouldn’t”, a woman says that she would let her husband hit her with a sandal in public as he is a love of her life.

The woman says that she loves her husband when he gets angry and admits that she has no objection regarding it. To our shock, She goes on to confess that she got beaten by her husband in public several times. When Gopinath, the host of the show asks, how she couldn’t feel ashamed of it, the woman replies by saying “Enn Lovvu sirr athuu” (He is the love of my life) to get applause from the spectators and other participants present there.

“It has been already decided that my entire life is going to be with him. It is just a small sacrifice comparing to what he is doing for me” she said which made her husband blush. “When I am supposed to do anything for him, a simple “beating” is nothing.” she added. “Even I am ready to get slipper shots from him right here, right now because I am ready to do anything for him” the wife says.

The episode was streamed in Vijay Television last year and the woman received condemnations from various people. Now, it got resurfaced again in Twitter with many expressing their objection over it. A twitter user uploaded the video and compared the woman with the female lead character in “Arjun Reddy” movie whereas another one said “This abuses loving woman, man with smirk on his face as if he’d something great and the people clapping by falling for this bullshit ‘kaadhal’ normalizing violence need serious help!”

This abuses loving woman, man with smirk on his face as if he'd something great and the people clapping by falling for this bullshit 'kaadhal' normalizing violence need serious help! https://t.co/8qdeqtbJpa

A different version of Stockholm syndrome. I've come across such humans. Either they were gas lighted and made to believe that they're worthless and has to be dependent on a person or they blindly romanticise arsholes.
Indian Union cinema itself is against consent for that matter https://t.co/XTBC0gkuMG

A person who loves you, will never hit you. And if they do, they don’t love you.

Don’t let anyone convince you into believing that abuse comes from a place of love. https://t.co/fQox6YsKXI

these people are those exact ones who do those cringe tiktok kadhal videos to en jeevan sad bgm 💀 https://t.co/sNnyDCzYNQ

Someone get her help, please. And some self-respect. Also need to examine these specimens clapping for this and all https://t.co/UoXoMSH1hR

This is actually pretty common defense mechanism for people that are abused. They try to glorify it and call it love to avoid facing the reality that they are abused https://t.co/9B4W9xXkXg

The way ppl have been made to believe abuse as love is really sickening. The idea of tolerating physical abuse being considered as a sign of love is even more pathetic.

We as a society has made this illusion in the minds of ppl & I just wish we could find a way to unread this. https://t.co/A0MKCv8sfS