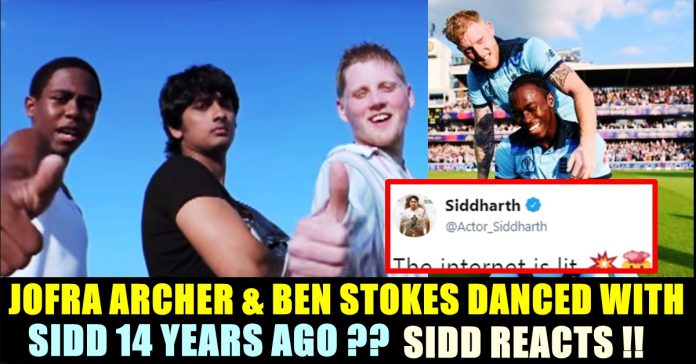 Internet is a best place if you are in need of some relaxation, especially if you are in need of humour to relax yourself. They can relate anything with anything to make us laugh. The best example for it is the recent sensation Nesamani who is not even a real life personality. They made him viral when a ardent fan of actor Vadivelu related a hammer with the comedy actor’s fictional character, Nesamani.

Now they have related a south Indian movie song with World cup champions which is hilarious to the core.  England all-rounder Ben Stokes helped Jofra Archer overcome nerves before the Super Over that won the hosts their maiden cricket World Cup crown in an extraordinary final against New Zealand on Sunday. Despite of the final over controversy, England team celebrated their victory in style. A particular picture of the duo after winning the match captured and it went viral across the Internet. The picture shows Jofra Archer having his sigh of relief after bowling a crucial super over to restrict New zealand with in 16 runs. Ben Stokes was seen patting the seamer in his shoulder.

Take a look at the picture here :

You will be baffled to know what Indian twitter users did with this picture. They captured screenshot of a Telugu song which starts like “Chandrulo Unde” of actor Siddharth from the movie “Nuvvostanante Nenoddantana”. In the screenshot Siddharth will be seen dancing with two foreign junior artists whose looks will be similar to Stokes and Archer.

Netizens posted a meme saying that Ben Stokes and Jofra Archer performed in a song together years back and won the world cup together now which left everyone in spits. Check out the meme here :

The internet is lit 💥🤯😂 pic.twitter.com/RA8RYrfF1b

Check out some of the hilarious reactions for this post here :

Becoz of siddharth motivation they won the WC

@benstokes38 @JofraArcher guys is that you two in the pic?

Can u actually trace to check if they are the same ? Ben looks pretty much same and that’s London 😅

Lol this scene takes place in England too..since Santosh (@Actor_Siddharth) is also from there..

Hilarious ain’t it ?? However actor Siddharth is currently waiting for the release of his movie “Sivappu Manjal Pachachi” and “Aruvam” in Tamil. Ben Stokes and Jofra Archer are very much busy in celebrating the victory of the world cup.