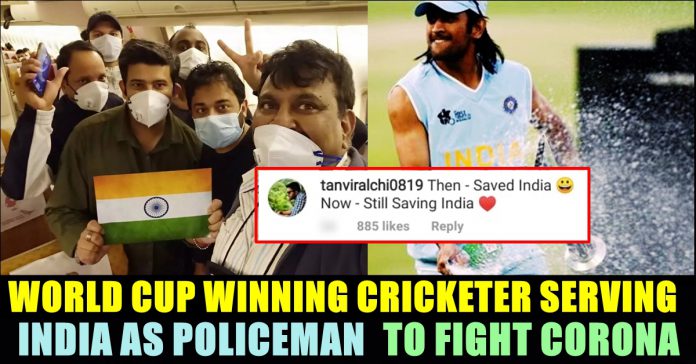 Police officers are working hard in this crucial situation to help the nation from getting affected to the deadly virus COVID 19. Since the announcement of lockdown, they are working hard in restricting the citizens from coming out of their homes to avoid community spread. Many videos and pictures of police officers throughout the country trying several ways to control citizens are surfacing in Internet in daily basis.

A Tamilnadu cop was seen shedding tears in front of public to make them stop coming out of their houses whereas as another cop created a peculiar corona helmet to scare people who are roaming around. We also happened to see videos of cops beating youngsters to make them understand the seriousness of the issue. Now, to our surprise, a world cup winning cricketer for India, is serving the nation to combat the virus by working on field to make people stay home.

Johinder Sharma, the man who is still in the hearts of Indian cricket fan for his historic final over in the T20 world cup tournament of 207, is currently on the streets carrying out his duty as a police officer amidst the lockdown implemented by the government to fight COVID 19. On seeing this service to the nation since 2007, International Cricket Council saluted the world cup winning hero through their social media platforms.

Posting a collage of Joginder’s unforgettable moment from 2007 world cup finals and a current picture of himself in duty, ICC wrote “#T20WorldCup hero 🏆 2020: Real world hero 💪 In his post-cricket career as a policeman, India’s Joginder Sharma among those doing their bit amid a global health crisis.”

2007: #T20WorldCup hero 🏆 2020: Real world hero 💪 In his post-cricket career as a policeman, India’s Joginder Sharma among those doing their bit amid a global health crisis. [📷 Joginder Sharma] #cricket

Sharma is currently serving his duty in Hisar as the country is facing a lockdown due to the virus which killed more than 30,000 across the world. “I have been a DSP since 2007. This is one of a kind challenge for me as a police officer because of the general fear and I can tell you that I have seen quite a few challenges in my years of service,” Joginder Sharma had said earlier to the media.

The fast bowler’s effort in the last over of 2007 world cup finals against Pakistan, made India to lift the trophy. As soon as the post surfaced from ICC, people in social media are lauding the efforts of the 36 years old.