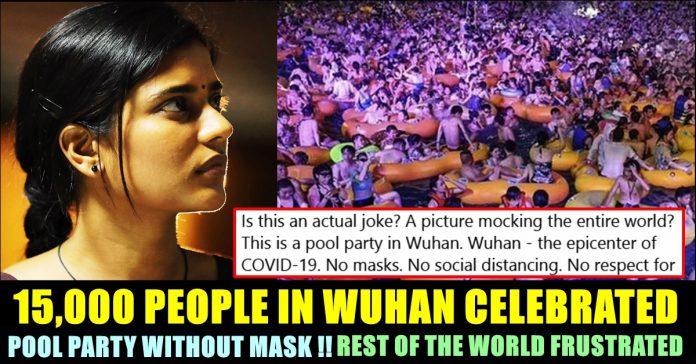 Wuhan, a city located in China where the first case of COVID 19 is registered, celebrated pool party yesterday only to leave the rest of the world dejected. Thousands of people packed shoulder to shoulder with no face masks in sight, frolicking on a rubber float and cheering along to a music festival in the city which caused the deadly diseased and made the entire world to go under lockdown.

The pool party took place at the Maya beach water park of Wuhan city which is looking very removed from the outbreak that the rest of the world continues to combat the virus which killed 7 lakh 77 thousand people across the world. The Chinese city which went into lockdown on 23rd of January 2020. At that time, the virus had killed 17 people and affected more than 400. It was a week after China government confirmed that human-to-human transmission of the virus had taken place, something not previously proven.

The city which has 11 million population was entirely cut off from the rest of China, cancelled all the public gatherings and people were quarantined. By March, the lockdown slowly started to ease. Shopping malls began re-opening, public transport started to run and people slowly started heading out. However, social distancing was still in place and masks were required to be worn compulsorily.

On 8th of April, the lockdown was officially lifted in Wuhan. Marriage ceremonies started taking place and schools, colleges got reopened and public transportations resumed operations. Despite of few new cases, Wuhan came back to complete normalcy in July. Cinema halls, certain parks, libraries, museums were allowed to open at half capacity and larger gatherings were given permission to take place.

On 18th of August, the images of party goers attending the HOHA water electrical Musical festival over the weekend have proved that life has edged back to normal in Wuhan. Organisers even offered female tourists half the price to attract them to their event.

It’s back to party life in Wuhan. Hundreds turned up for a pool party in a footage here filmed on 15th August 2020.
pic.twitter.com/0vpwVqOjaE

The Water park which was re-opened on 25 of June, started seeing large number of visitors only in August. The park currently sees 15,000 visitors on weekends according to the deputy general manager of the park. He said that it is the half the number of people visited last year same time.

Pictures of people celebrating in the pool emerged and even the people of China got surprised to know about it. However, rest of world, which is still combating the virus condemned the act of the people asking whether it is a mock to the entire world.

Is this an actual joke? A picture mocking the entire world? This is a pool party in Wuhan. Wuhan – the epicenter of COVID-19. No masks. No social distancing. No respect for even global optics. Yes, they have reported no new cases in months. But read the room Wuhan. Read the room. pic.twitter.com/hnLmdIPFp8

WUHAN, CHINA. WHERE THE COVID19 ORIGINATED FROM. COUNTRIES ARE SUFFERING, THE ECONOMY AND PEOPLE ARE DYING, AND MILLIONS OF PEOPLE HAVE LOST THEIR JOB DUE TO THE PANDEMIC, YET YOU HAVE THE AUDACITY TO THROW A HUGE POOL PARTY AS IF YOU'VE DONE IT ON PURPOSE. Y'ALL ARE SICK. 🤢 pic.twitter.com/NlMhUDRaOc

Meanwhile, tamil actress Aishwarya Rajesh, on the night of 18th August posted a tweet writing “like seriously” and revealed that it is the Wuhan party that made her upset in the morning of 19th August.