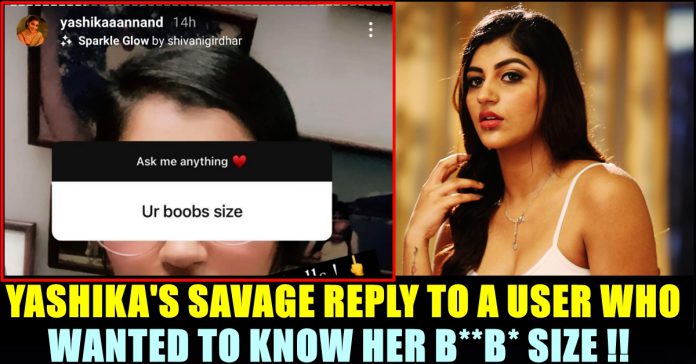 Actress Yashika Anand who rose to fame among youngsters by participating in the second season of Kamal Haasan hosting reality game show Bigg Boss, conducted a question and answer session with her Instagram followers on Thursday. She who is currently enjoying 2.4 million followers in the photo/video posting social media application, answered to a number of users who expressed their admiration towards her for the way she behaved in the celebrity game show. However, she also happened to face some inappropriate questions from few miscreants and instead of turning a blind eye to their questions, the 21 year old decided to give them back right away.

In the recent Question and answer session, a pervert asked the actress to tell the size of her breasts. Replying to him, Yaashika said “For sure bigger than your balls” by adding the middle finger emoji.

When a user asked whether she would marry a younger guy, Yaashika said “I do believe love doesn’t have any limits. But I wouldn’t love someone who is younger to me. I am into older ones, Minimum 5-7 years difference” she said.

One more user asked her to tell her body measurement and the actress replied to him saying “Why ? Are you planning to stitch clothes for me ? Oh no thanks”

When she was asked whether she would marry a normie guy, Yashika said “Yes if he would promise to just be mine, spoil me with his love and affection, Make me laugh and sometimes fight with me (and later make up to me)”

A user said that he watched a “matter” video of her from her school days and Yashika replied to him saying “Oh apdiyaa, Enakkum send pannunga please, even I wanna see If it’s the ghost in the video or you have become blind”

When someone asked what kind of a man she would choose to go handout with or marry, Yashika said “First of all, I want a boy who is little good looking, has beard, little shy, talks to only me (lol just joking), he should definitely be in my good friend first, tell me about all the smallest of smallest things he does in a day, I don’t expect anything from him but just his time and lots of love and some humour. ps- should accompany with me when I go for shopping and help me choose because I take a lot of time”

On the work front, Yashika is expected to appear in “Ivan Thaan Uththaman” of Mahat Ragavendra and “Raja Bheema” of Aarav and many other films.