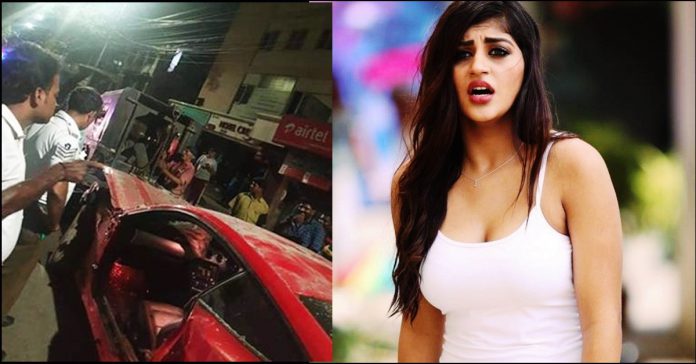 Being a 20 year old actress, Yashika is known for her bold statements and instant replies to her haters in social media platforms. Now the actress caught in controversy due to some media reports which were emerged against her.

The reports alleged that her car was rammed into a swiggy delivery boy named as Bharath and it caused him severe injuries. The report also said that the car carried Yashika and her friends who were influenced by alcohol. The driver of the car was also accused by media for driving the vehicle after consuming alcohol.

As Barath is getting treated in Rajiv Gandhi government hospital, reports said that the actress escaped from the spot immediately by calling a cab. Now, in a way of denying all these allegations, Yashika posted a series of Instagram stories in her official Instagram account by explaining about the scenario.

In her first story Yashika said that stepped out of her car only to check if the car which met with an accident is alright. She says she did it out of humanity without thinking about the problem she is going to face due to appearing in public all of a sudden.

In the next story, Yashika expressed her disappointment on the news being spread against her. She says that she stood there until police officers took the original driver and co-passenger who caused the accident, to the police station.

The actress said that Police officers of Tamilnadu are not fools to let Yashika go without even question her. She added that Police know that she stood there to see What’s happening.

The actress slammed the media houses for damaging her reputation by accusing her unnecessarily. She asked them to check the CCTV footage from a near by hotel to know about the truth. “I am not part of this even a bit” she wrote in her story.

In her next set of stories, the actress asked her followers not to believe such rumours and said that she doesn’t own any car other than a honda city. The actress even added that she is going to register a defamation case against those media houses which tried to damage her name.

Check out the stories below :

Yashika was last seen in a movie named as Zombie which doesn’t performed well in the box office. She did a special performance in the finals of Bigg Boss Tamil season 3.