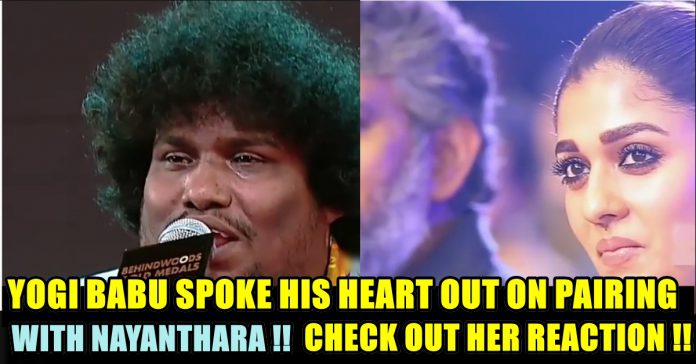 Yogi Babu is riding a new wave of stardom. His recent music video, ‘Kalyana Vayasu’, from Nayanthara’s upcoming film Kolamavu Kokila, also known as CoCo has gained over five million views so far and is trending at number one on YouTube.

The video begins with Yogi Babu confessing to Nayanthara that while he is facing pressure from his family to get married, he has always pushed them away saying he has not found the ‘right girl’.

The video shows Yogi working at a grocery shop and has a compilation of him dancing, stalking, skipping and riding the bike.

Nayanthara’s look for Kolamavu Kokila has a lot in common with her look in Naanum Rowdy Dhaan. The actor is also seen wearing a backpack – both in the song and in the film’s posters. Composed and rendered by Anirudh, the song has both English and Tamil lines, penned by actor Sivakarthikeyan. The film marks Anirudh’s collaboration with Nayanthara after Naanum Rowdy Dhaan and Velaikkaran. The video is also being widely appreciated by many on Twitter.

Touted to be a dark comedy, the film is bankrolled by Lyca Productions.

Kolamavu Kokila is written and directed by Nelson Dilipkumar. Director Nelson’s previous film Vettai Mannan with Silambarasan, Jai and Hansika got shelved for unknown reasons. This film will be his directorial debut. Nayanthara is gaining a spot for herself in the industry with her choice of films centered around her character. She has a couple of thrillers in Tamil, Imaikkaa Nodigal and Kolaiyuthir Kaalam, up her sleeve in addition to Sye Raa Narasimha Reddy in Telugu.

Yogi Babu, who has become quite popular as a comedian, will be seen playing an important role in this film. He has a good number of films lined up for release this year including Pariayerum Perumal, Junga and Thalapathy 62. He was recently seen in Kiruthiga Udhayanidhi’s Kaali.

In a recent award function when Yogi Babu was asked what he feels on pairing with  “Nayanthara”  he genuinely answers that she is the only heroine who does not cared of stardom. She paired with me in that song like she is pairing with a big hero. No heroine would do that. Thats why i like her. Will you pair with me if i did the lead ?” he questioned the host Keerthi, wife of Shanthanu. She said “I’m married” with a big smile in her face.

Whats your opinion on his speech ?