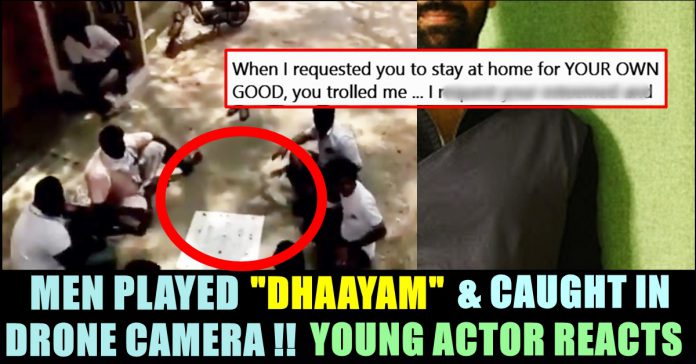 Actor Shanthanu who earlier warned people about going out in this lockdown period, has came up with a video of people playing popular game indoor “Dhaayam” played by Tamilnadu based people. COVID 19 which killed more than 88,000 people is a serious threat across the world right now. To avoid community spread in India, Prime minister of the country asked people to stay home for 21 days which is till April 14. However, to kill boredom, many people are roaming around without considering the announcement made by the central government.

Right from high profile politicians to cinema celebrities, everyone are sharing how they are killing the time and giving suggestions to their followers. Many of the heroines are also conducting chat sessions with their fans as they are forced to be in home. Movie, Serial shootings and post production works are also interrupted due to the lockdown. On the very first day of the government’s announcement, actor Shanthanu who is known for being very much interactive with his followers, posted a video of people roaming outside and warned them.

Check out the tweet he posted on 23rd of March here :

Makkaley PLS PLS PLS stop roaming out thinking u won’t catch the Virus ! PLS SPREAD WORD ABOUT SOCIAL DISTANCING! I still hear about gatherings at pani puri & beeda shops 😡😡 From tom the police will start beating d shit out of u if you r spotted outside unnecessarily 🙏🏻🙏🏻🙏🏻🙏🏻

So carelessly roaming on the roads is right ? What shud we do about this pic.twitter.com/ISfpZy32Yp

Shanthanu also shared several videos of police officers asking people to stay home to avoid community spread. However, people who didn’t realize the seriousness of this issue, started trolling the actor for his tweets. Now, after Government started taking strict actions against those who are violating the government’s order such as arrests and inspecting with drone cameras, Shanthanu came up with a video of people playing “Dhayam”, in a way of violating the order.

The video shows, Drone camera capturing a bunch people men playing “Dhayam” by sitting in circle. Adding the video, Shanthanu wrote “When I requested you to stay at home for YOUR OWN GOOD, you trolled me … I request your esteemed and valuable advise on this. #Irresponsible”

When I requested you to stay at home for YOUR OWN GOOD, you trolled me … I request your esteemed and valuable advise on this #Irresponsible pic.twitter.com/ssoPmf71uV

However, followers of Shanthanu kept asking about updates of his upcoming film “Master” in the comment section. The film was supposed to release today but got postponed due to this corona outbreak. Comment your views on this video shared by Shanthanu !!