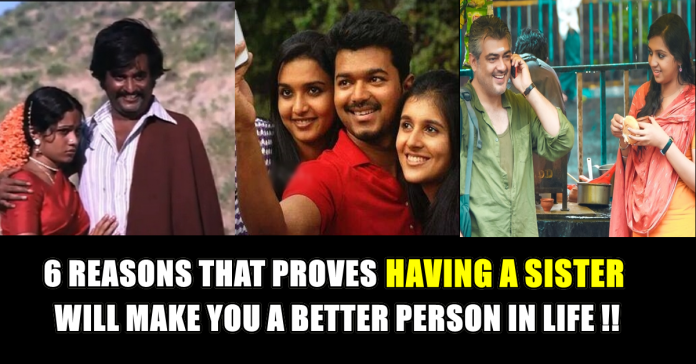 Turns out a sister could teach you a lot about conflict-resolution, empathy and how to nurture others.

“Sisters help you develop social skills, like communication, compromise and negotiation,” says Alex Jensen, assistant professor in the School of Family Life at Brigham Young University and the author of research into sibling relationships. “Even sibling conflict, if it is minor, can promote healthy development.”

1. A sister gives you a mental health boost

Need help out of a funk? Call your sister. A 2010 study published in the Journal of Family Psychology showed having a sister can boost your mental health and self-esteem. In particular, researchers from Brigham Young University found sisters help protect their siblings from “feeling lonely, unloved, guilty, self-conscious and fearful.”

“What we know suggests that sisters play a role in promoting positive mental health,” Jensen tells Motherly, “and later in life they often do more to keep families in contact with one another after the parents pass.” 2. She makes you more compassionate

The same Brigham Young University study discovered that having a sister can help you become a kinder, more giving person. That’s because sisters are promoting positive social behaviors such as compassionate and altruism  when they show love and affection. The strengths of these effects aren’t even replicated with loving parental relationships.

“Even if there is a little bit of fighting as long as they have affection, the positive will win out,” lead study author Laura Padilla-Walker, a professor in BYU’s School of Family Life, said in an interview with ABC News. “If siblings get in a fight, they have to regulate emotions. That’s an important skill to learn for later in life.” 3.A sister helps you sharpen those interpersonal skills

Turns out a sister could teach you a lot about conflict-resolution, empathy and how to nurture others. According to Jeffrey Kluger, author of The Sibling Effect you could learn how to handle tough arguments or diffuse escalating situations by interacting with your “combating” or “physically intimidating sister”. On the other hand, Kluger says that having a younger sibling who’s insecure or needs guidance can help you become more nurturing and empathetic to others.

4. Improves your communications skills without her knowledge

Research has found that brothers who grew up with sisters are better at communicating with women than those who were only children or only have brothers. (This applies the other way around, too.)

“Some research suggests that having a sibling who is a different gender from you can be a real benefit in adolescence,” Jensen tells Motherly. “Many of those sibling pairs become closer during the teen years because they become good sources of information about the opposite sex.” 5. A sister teaches you to be independent and ambitious

A 2009 survey conducted by British psychologists revealed that people raised with atleast one sister were more determined and more independent than those who grew up with just brothers. Speaking to the Daily Mail, study co-author Tony Cassidy of the University of Ulster said, “It is about that intrinsic desire to want to do better every time, to strive towards goals. It certainly seems there is something about the family situation with the number of girls in it that leads to more encouragement to achieve and be independent.” 6. She shows how to achieve balance

That same 2009 survey, which included 571 participants ages 17 to 25, found that sisters can help their siblings reach inner peace. In particular, people with at least one sister were better able to cope with issues in their life and experienced less stress. In turn, they were happier and more optimistic than their counterparts. Why exactly do sisters—not brothers—help you achieve balance, though? It all has to do with emotional expression, Cassidy told the Daily Mail. Women open up “channels of communication and it becomes a much more expressive situation and that’s positive,” he said. “Emotional expression is fundamental to good psychological health and having sisters promotes this in families.”