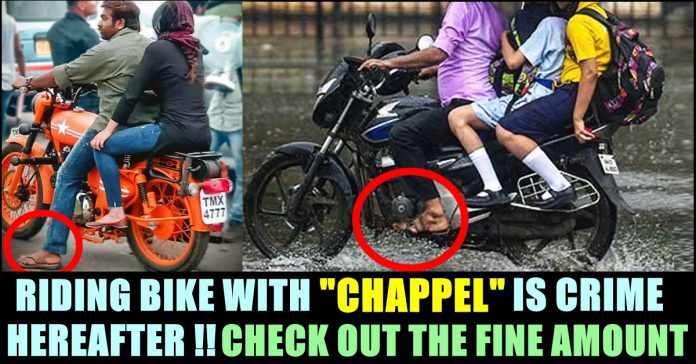 The new traffic rules and penalty amount for violating it are making headlines everyday. Yesterday, a report said that Lorry, Truck drivers belong to Uttar Pradesh have to pay fine if they caught wearing “Lungi” while driving.

Now to our shock, one of the motor vehicle rules compels the bike drivers to wear shoe while driving . The reason behind this rule is that flip-flops or similar footwear might create difficulty in changing gears or could even result in loss of grip while the vehicle is coming to a halt, resulting in a slip. Riding a two-wheeler with proper gear is required for ensuring one’s safety. However, imposing this rule in rural areas is going to be slightly difficult. One must pay Rs.1000 if they caught violating this rule and doing it often might get him a jail term of 15 days.

The government of India has been making these rules to keep the road safety in check. The Motor Vehicle Amendment Act was implemented in India since 01 September, 2019. Under the new act, the penalties for traffic rule violations have been increased by a huge margin. For major offences like driving under the influence of alcohol, the penalty stands at Rs 10,000.

Nitin Gadkari, Union Minister for Road Transport and Highways has stated that the amount for the fines have been increased in order to make people obey traffic rules.

Since the act came into force, commuters have come across multiple cases in which huge amount of fines have been imposed on road users. Recently, a truck driver was issued a cumulative challan of Rs 1.16 lakh in Rewari, while other was issued a challan of Rs 86,500 in Odisha’s Sambalpur. Similarly, a two-wheeler driver, who was found riding his vehicle without a helmet, with no documents whatsoever was fined Rs 24,000.

Nitin Gadkari, Union Minister for Road Transport and Highways has stated that the amount for the fines have been increased in order to make people obey traffic rules. However, these rules doesn’t impressed the citizens of the country at all as they are fuming in social media to express their disappointment. Other set of people believe that it is the need of the hour and will ensure the safety more than before.

What do you think on these new traffic rules ?? Comment your views below !!