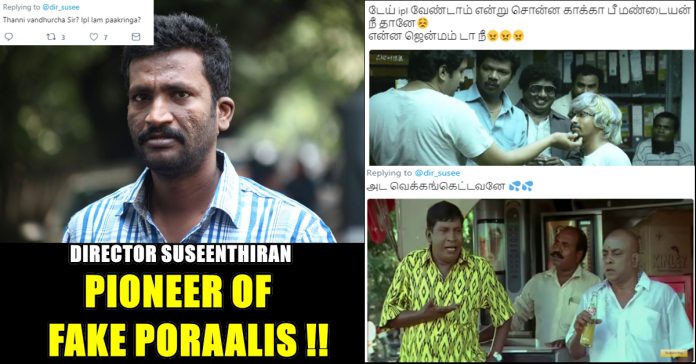 Suseenthiran, a prominent filmmaker of Tamil film industry who is known for his successful  works such as Vennila Kabadi Kuzhu, Naan Mahan Alla, Paandiyanaadu, Jeeva and also National award winning critically acclaimed Azhagar Saamiyin Kuthirai etc. Director Suseenthiran is renowned for his tightly written engaging screenplay which not only will entertain the viewers but also will educate them with a strong social message. He occasionally got acclaimed for that from the audience as well as from the critics. But the sane director missed to stand firmly for what he exactly wanted in a recent quarrel that took place in state Tamilnadu. In the name of protesting for the constitution of the Cauvery Management Board,  A group of political parties including Dravidar Viduthalai Kazhagam, Tamizhaga Vazhvurimai Katchi (TVK), Viduthalai Thamizh Puligal Katchi, Thamizhar Vidiyal Katchi and Social Democratic Party of India, Naam Tamizhar katchi are involved in boycotting the IPL Cricket matches that are supposed to be hosted by M.A Chidambaram Stadium, Chepauk, Chennai.

Even people from the film industry also announced a protest and proposed to boycott IPL in Chennai Chepauk. “At a time when the youngsters of Tamil Nadu are protesting for setting up the Cauvery water management Board and against Sterlite, the popular T20 tournament seems to be an event that is being staged to divert them from their goal. We are not calling for a ban on the entire tournament, but asking the organisers to postpone it as people in the state are fighting for their very livelihood,” said veteran director Bharathirajaa. Several groups, including the VCK, Naam Thamizhar, SDPI, came in droves and descended at the Anna Statue on Anna Salai on the match day which is April 10. It is when the police stopped all protesters at the station that things started getting ugly. Fans were caught unaware as they walked towards the stadium. TV visuals confirm assault of fans wearing Chennai Super King jerseys. some women fans too were not spared. Some of the protesters harassed women fans who were wearing the CSK jerseys and asked them to change it. As the situation goes out of hand IPL Chairman Rajiv Shukla announced as “The matches had to be shifted out of Chennai as police had said that they were unable to provide security in the prevailing situation. CSK is not averse to shifting base to Pune,” which denotes that all the 6 matches are shifted to Pune as per the IPL management’s decision. On the day of the announcement director Suseentharan firmly appreciated the decision of changing the venue of matches by congratulating the protesters in his twitter account. He uploaded a famous news channel’s update which confirmed the cancellation.

Director Suseenthiran got massive support for his tweets from his supporters which did not last long. Yes, Among his various number of faces, he showed his second face which is an absolute contrast to the first one.

He supported the people who boycotted IPL in Chennai and changed the venue by saying that it may divert the Tamilnadu youngsters mindset from concentrating on current issues. Now, he himself posted a picture of Dhoni in his twitter account and celebrated the victory of Chennai super kings.

He did not stopped with that. He also announced his 4.5+ Lakh followers that he is an ardent follower of IPL by appreciating Rashid Khan’s bowling yesterday.

Some of his followers reacted according to his tweet :

In the series of his contradictory tweets we cannot identify which one is real Suseenthiran and which one is his admin. We also complained to cyber crime to check whether his account is hacked or not.