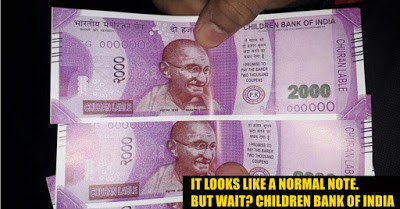 Rohit, a customer care executive at a call centre in Chhatarpur, had visited the SBI ATM located in Sangam Vihar’s Tigri on February to withdraw Rs 8,000. What he received were four notes with ‘Churan Lable’, ‘Children Bank of India’ and ‘Bharatiya Manoranjan Bank’ written on them.  The four notes he got from the ATM in Sangam Vihar had at least 10 deviations in printing from serial number “000000” to the solemn promise to “pay the barer two thousand coupens (sic)” as “guaranteed by Children Government”.

Rohit then called the police station to work on the matter. A sub-inspector and head constable soon arrived at the scene. Believing Rohit’s complaint to be bogus, the sub inspector used his Axis bank card to withdraw Rs.2000 from the ATM and alas, he too got the same fake note losing 2000 from his account.

This case has sent shocks over the Delhi community. Fake notes were common in ATM’s few days back, but this one is apparently something of a higher scale.Police said they are yet to identify the people behind this. A case of manufacturing documents resembling currency notes, using forged or counterfeit notes and of cheating has been registered at Sangam Vihar police station under IPC sections 489-b, 489-e and 420. An SBI spokesman has said they will be sending a team to investigate the matter.