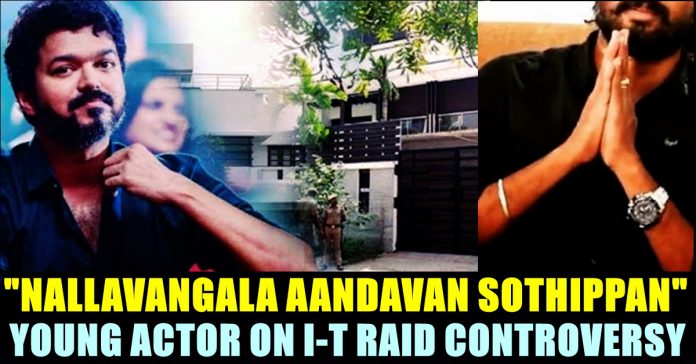 During the shooting of Vijay’s upcoming film “Master”, I-T officials entered the spot and demanded Vijay to cooperate their operation. The I-T officials on Thursday said that raids at several properties linked with the biggest personalities of Tamil film industry, including actor Vijay, has led to the discovery of undeclared income in the box office collection of Bigil. The properties of AGS Cinemas and film financier Anbu Chezhiyan were searched and actor Vijay was questioned in the sets of “Master” regarding an alleged tax evasion case. The home which belongs to Vijay in Chennai was searched on Wednesday. Their press release has declared that the film has collected more than 300 crores in the box office.

However, the recent report from the Income tax department has said that no cash seized from the house of the actor. This sudden visit of the income tax officials has instigated a huge furore in the digital platforms. Fans of the actor started expressing their support towards their idol and trended hashtags regarding the same.

Along with the fans, few celebrities also stretched their supportive hand to the fans of the actor by posting tweets through their official social media platforms. Actor Soundarrajan who shared screen space with Vijay in Bigil, has posted a tweet supporting the actor. He said that the entire incident reminds him of a popular Rajinikanth dialogue. Apart from Bigil, Soundara Rajan is known for acting in Jigarthanda and Sundharapandian in which he did significant roles. “My brother will surpass such hurdles with ease. A calm before the storm” he wrote in his tweet.

Malayalam actor Aju Varghese who is know for his appearance in films like Madura Raja, Love action Drama has posted a tweet in his official twitter account, hinting about the audio launch of “Master”.

Director Rathnakumar who is currently working in “Master” as writer also posted a similar tweet in a way of hinting about Vijay’s speech in “Master” audio launch.

We all know that the audio launches of the movies of actor Vijay has got a whole new dimension since the actor started giving speeches addressing the social issues and motivational quotes. He who directly interacts with his fans only during the audio launch, narrating them a short story in order to make them lead a successful life. His speech during “Bigil” audio launch is still making waves as he gave a powerful speech targeting the current politicians and their atrocities. Fans of the actor are eagerly waiting for the audio launch of “Master” only to witness the speech of their idol.