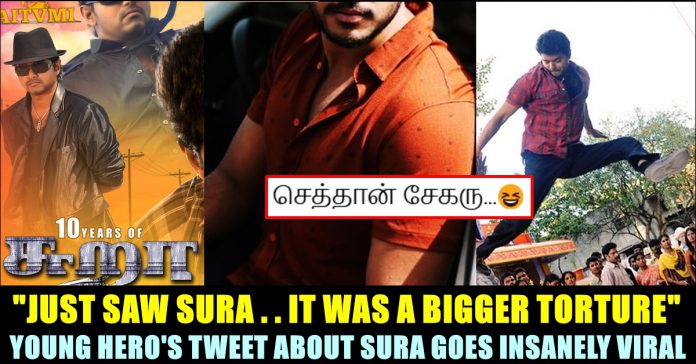 An old tweet uploaded by South Indian actor Sundeep Kishan about Vijay’s 50th movie “Sura” is doing rounds in social media with hilarious reactions from the fans of both Vijay and Ajith. In the tweet, the actor expressed his disappointment over the film and said that Vijay would have sweated his brain out while hearing the script from the director. Sundeep is known among Tamil audience for appearing in films such as Lokesh Kangaraj’s “Maanagaram”, “Yaaruda Mahesh” etc.

“Sura” was directed by S.P Rajkumar became a box office dud during its release time. Now, on this special day, the director who is currently directing serials for SUN TV opened on why the film didn’t do well as he expected. The story of “Sura” revolves around a young fisherman who fights against a influential minister to save the lands of his fellow fishermen to build houses for them.

Tamanna acted as Vijay’s love interest and actor Vadivelu led the comedy track of the movie. Though the film failed to impress audience, producer Sangili Murugan reported to media that it recovered the budget through satellite rights. The film garners huge viewership whenever it gets telecasted in Sun network, according to reports. The 50th film of “Thalapathy” became a box office dud despite of being a film under Sun Pictures distribution.

Now, a tweet of Sundeep Kishan about the film has became a subject to severe online trolling and criticism. On 14th of May 2010, Sundeep wrote “jus saw sura…it was bigger torture thn the hyderbad heat…phew sweatin my brain out…i guess vijay did the same wen he heard the script.” after watching the 50th film of Vijay.

Reactions are pouring in large number for this tweet for the past two days. Fans of actor Ajith kumar are sharing the tweet by trolling Vijay whereas Vijay fans are sharing it with the latest tweet of Sundeep where the youngster lauded Vijay during the release of “Master”. Check out some of the reactions below :

Yeah of course sura was worst movie. Yet it is the most watched nd got High TRP than Mankatha on Ajith bday 🤣

From a set back he came back stronger than anyone in industry 😎🔥.

Yeah It was Flop 😉