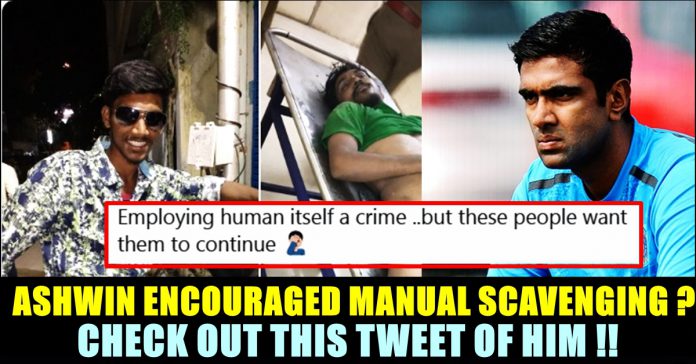 Youth from Tamilnadu died in the process of cleaning a septic tank in Express avenue mall. The 25 year old youth died of asphyxiation while helping his brother to come out of the tank. Along with four others including his brother, Arun Kumar, the deceased went to manually clean the septic tank in the early hours of Tuesday.

Arun Kumar’s brother Ranjith Kumar went inside the tank initially and collapsed immediately due to the toxic fumes and poisonous gases. Arun who jumped into the tank to rescue his brother, lifted up his brother but couldn’t come out of the tank which resulted in the youth collapsing to death due to the suffocation of toxic fumes.

The police investigation revealed that a man called as Dhandapani, a private contractor has hired five men to manual scavenging. Arun Kumar’s body has been sent to government hospital for autopsy as a part of investigation.

On seeing this heart wrenching death, popular cricketer Ravichandran Ashwin worried and expressed his grief by posting a tweet in his official twitter account. “😢😢. Do we have enough precautionary devices to aid these hero’s?” read the tweet of Ashwin.

😢😢. Do we have enough precautionary devices to aid these hero’s? https://t.co/ALb7XPU157

Manual scavenging is illegal and the act was banned back in 1993. However people are still taking this job and Tamilnadu displayed highest number of sewer deaths with 144 cases reported according to India Today. On seeing this tweet of Ashwin requiring a precautionary equipment to resist deaths, many felt that this statement of the cricketer supports Manual scavenging. They started expressing their opinions in the same platforms as well. Check out some of them below :

How cutely he calls him a hero 😭
Classic venom!
You force them to do it.
You let them die.
You call him a hero.
"precautionary devices to aid… " it seems!
Manual scavenging is illegal nu sollungonna! pic.twitter.com/rqmWGWvtlF

Such insensitivity, much wow. https://t.co/aHSWxFsALS

Firstly why do still some human has to do this.. you won't ask it.. problem lies there, not because of unavailability of some equipment.. https://t.co/ZBjcjpYZU8

So, you only want devices to "aid these heroes". You don't want them to stop doing what they're doing. You are comfortable with providing equipment to make their job easier, but God forbid, these "heroes" must not abandon the practice of cleaning sewers, right? + https://t.co/0gpdMFmMic

Employing human itself a crime ..but these people want them to continue 🤦🏻‍♂️ https://t.co/hfSiS07VSd

Yeah romanticise this by hailing them Heroes & Keep them as underprivileged forever. #StopManualScavenging https://t.co/gM2BW9gkIe

Thanks for the info doc.

A recent survey of July 2019 has identified 54, 130 people getting committed to this job despite the prohibition of law.